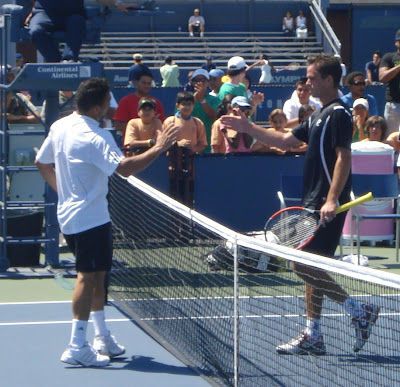 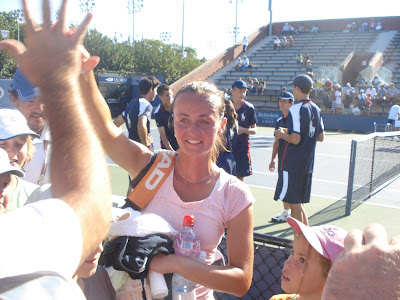 Congratulations to the victor!

Once again, the US Open comes to NY and I love it. I go every year, both to the qualifiers and to the main draw. It is my favorite time to be in NY.

Personally, I think the qualifiers is better than the main draw, at least the first week of the main draw. Aside for the lack of crowds, you get very excellent tennis matches with lots of drama. You see players on the way up, and some on the way down. Most are never-wills. You also get to sit and talk to coaches and parents and player entourages in a way that is simply impossible during the main draw. You can learn some things and see that life is tough all over!

Players in the qualifiers must win 3 matches to make the main draw. Winning only once or twice during this week results in a big fat zero payout. If theplayers win all 3 matches, they make the main draw. Just being in the main draw, even with a first round loss, is worth a couple grand. Most, if not all qualifiers will lose in the first round. So 16 players will work for a solid week--and work very hard--and make only 3 or so grand. Factoring the cost of travel, lodging, coaching, food, clothing, rackets, stringing,etc. . .they don't do so well. The remaining 112 players, those that lost during the Q week, do even worse. They make nothing.

The 2 players in the picture up top are Victor Estrella and Xavier Malisse. Victor, the player on the left, was the victor. He is a young Brazilian on the way up. Xavier, the other player, was a former top 50 player who was considered a real contender at one time. He was a media darling as well, in his younger days, and had long hair and a flamboyant persona. Unfortunately, his career did not turn out as he, and others, had hoped it would, and he has been struggling. I guess his short hair is a symbol of his new-found-focus. Perhaps it is to little to late. I wish him well.

I did peruse the draw and roster of competitors from this years tournament and I did not recognize any players from this year that played last year. Maybe that is good sign and means that all of last years players made the main draw this year.

I did recognize one name in the Q-tournament draw, Nicholas Massu. He is a former Olympic Tennis Gold Medal winner in 2004 and top men's player. I wonder what happened to him.

In urology, most of my own colleagues are still practicing and most urologists in my area can report higher incomes than last year because of a stregic merger of competing groups. I don't know of a single urologist that has left practice in Long Island due to the competition or external factors such as rising costs of living.

Recently Medicare has not been paying in a timely fashion. I know of one urologist that sees 95% Medicare patients. He has only received $1700 in reimbursements in 2008. For the rest of us urologists who see a mix of patients from a mix of payers, 3 days of work brings in considerably more money than the majority of qualifiers earn in a similar work week.

During Q-week, I watched the qualifiers struggle. I witnesses intense happiness with victory and devastation upon defeat. I saw several players at the end of their careers; no doubt faced with the question that I faced several years ago; "what next."
For me, as I watched the qualifiers compete, I felt comfort in my own situation. I am my own boss and my outlook is positive. I call my own shots. My wins are mine alone, as are my losses.
I think I am better off as urologist than a professional tennis player, aside for the fact that I really not very good at tennis. As a pragmatist, I know my earning potential, even with the current reimbursement landscape, is better than for 99.999% of tennis players.
So for now, I practice urology by day and play tennis by night.
And go to The US Open every August. . .the best show in NY.

Posted by Richard A Schoor MD FACS at 8:00 AM