25A: The Route of Broken Dreams 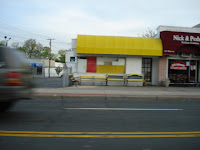 I drive home along Long Island's route 25A, a historic road that meanders along the fabled North Shore of Long Island. On my 7.6 mile drive home I pass nice homes, busy restaurants and bars, and thriving businesses. I also pass failing businesses. Route 25A has served as a good reminder of how lucky I am just to be in business 2 years after opening my doors. Here's the list of failures of my kindred spirit businesses: those that started around the time I did but have since closed.

That makes 9 failed start-ups in less than 8 miles. . .in an affluent area. Yes the economy is not well and in these times having a job or a business that is simply surviving might have to suffice.

Good luck out there.